Our RNA branch has recently been informed that the City of Leeds and ourselves have a new Royal Navy affiliation. We are now going to be affiliated to the latest submarine to be built in Barrow in Furness by the Royal Navy and she will be called HMS Audacious.

Previously HMS Audacious was a King George V – Class battleship, The vessel did not see any combat in the First World War. It was sunk by a German naval mine off the northern coast of County Donegal in Ulster, Ireland, in October 1914.

HMS Audacious is the fourth Astute-class nuclear-powered fleet submarine of the Royal Navy. Several previous vessels of the Royal Navy have borne the name. She is due to be launched in late 2016.

Known as a ‘trim and basin dive’, the event took place last week at BAE Systems’ Devonshire Dock at Barrow-in-Furness.

The operation saw the high tech submarine submerge fully under water for the first time, enabling the mixed Royal Navy, Ministry of Defence and BAE Systems team on board to test many of the vessel’s systems.

The dive was a crucial milestone as it allowed engineers to calculate the submarine’s precise weight and centre of gravity.

Some 16 tonnes of lead were taken on board and moved across the width of the vessel so naval architects could confirm their calculations.

The crew then dived 15 metres underwater to prove the safety and stability of the 7,400 tonne, 97 meter-long attack submarine.

Captain Scott Bower, the Commanding Officer of HMS Audacious, said: “It was a considerable privilege to take control of Audacious for the first time during the trial”.

“Yet as Commanding Officer I recognise this was a combined effort across the submarine enterprise, pulling together ship’s and Ministry of Defence staff, BAE Systems and a range of contractors to achieve success”.

“The completion of this successful trial brings great satisfaction to all involved and puts Audacious significantly closer to joining the fleet.”

Officially named in December 2016 and launched in April last year, Audacious is scheduled to leave Barrow for sea trials later this year.

HMS Astute, HMS Artful and HMS Ambush are already in-service with the Royal Navy.  Boats 5 and 6 – Anson and Agamemnon – along with a yet un-named seventh Astute class submarine are in different stages of construction at the Barrow site.

On completion of her sea trials Audacious is due to join her three sister Astute class vessels at HM Naval Base Clyde, the home of the UK Submarine Service.

There is a video clip of HMS Audacious entering the water for the first time in 2017, this can be viewed in the “Video Archive” folder.

To see the “First Trim and Basin Dive” please click on the link below. 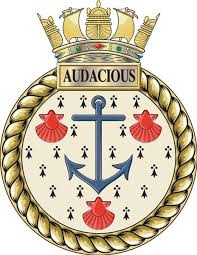