Almost all Royal Navy ships have affiliations to towns, cities and various organisations. Many of Ark Royal’s affiliations were inherited from previous ships to bear the name. Leeds Headingley No.1 RNA Branch has been affiliated to HMS Ark Royal for many years. The association between Leeds and the aircraft carrier HMS Ark Royal stems back to World War II and the third Ark Royal, adopted by the city in 1942. It is our belief that it is important to maintain the links between the Royal Navy and the Royal Naval Association. 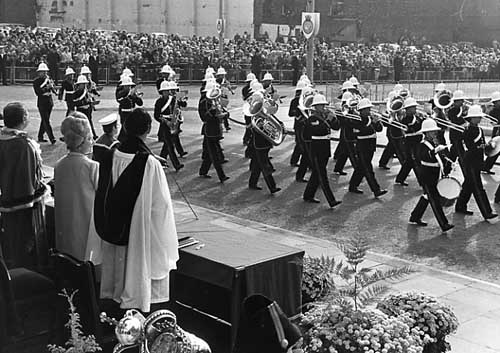 On 5th October 1973, dressed in pale blue, Her Majesty the Queen Mother is pictured on the steps of Leeds Civic Hall. The Lord Mayor of Leeds, Alderman Kenneth Travis Davison, is to the left of Her Majesty. The Freedom of the City of Leeds was to be granted to H.M.S. Ark Royal. Her Majesty was to confer the honour. The link between Ark Royal and the City began in 1941, when the previous Ark Royal had been sunk off Gibraltar. The people of Leeds immediately raised almost £10 million to commission a new vessel.

During the Second World War, the citizens of Leeds raised an incredible 9m to pay for Ark Royal IV, the last Ark Royal’s predecessor. Ark Royal was the sister ship to HMS Eagle, which was initially named HMS Audacious, hence the name of the class. Four Audacious-class ships were laid down, but two (HMS Africa and the original HMS Eagle) were cancelled when World War II ended, and construction of the other two was suspended for several years. Both surviving ships were extensively upgraded throughout their lifetimes.

The ship was originally designated Irresistible, but was renamed Ark Royal prior to launch.

HMS Ark Royal was a light aircraft carrier and former flagship of the Royal Navy. She was the third and final vessel of Invincible-class. She was built by Swan Hunter on the River Tyne and launched by them in 1981. Ark Royal was named by Queen Elizabeth The Queen Mother. She followed sister ships HMS Invincible and HMS Illustrious into service in 1985.

Affectionately known as The Mighty Ark, she is the fifth Royal Navy ship to have borne the name of the 1587 flagship that defeated the Spanish Armada in 1588. Originally intended to be named Indomitable to match the rest of the class, this was changed due to the public reaction to the loss of the Ark Royal name after the scrapping of the previous Ark Royal in 1980, after 30 years’ service.

Slightly larger than her sister ships, and with a steeper ski-jump ramp, Ark Royal carried the STOVL (Short Take Off and Vertical Landing) Harrier Jump Jet aircraft, as well as various helicopters. With a crew complement of over 1,000 sailors and aviators, she saw active service in the 1990s Bosnian War and the 2003 Invasion of Iraq.

Originally due to be retired in 2016, Ark Royal was instead decommissioned on Friday 11 March 2011, as part of the Navy restructuring portion of the 2010 Strategic Defence and Security Review. After Ark Royal’s decommissioning HMS Albion replaced her as the Royal Navy flagship.